Hello everyone! We hope you’re doing well! The situation is a bit hectic over here; France has been put on a nationwide lockdown for a month, and subsequently includes all the issues that come with it. We can’t wait for 2020 to be finally over!

We’re starting this news post with a rather depressing topic, so we can get it out of the way first: Sally’s health status.

Her health is stable, but the COVID crisis is preventing surgery from being scheduled, so despite  things getting better--she’s able to eat again!!-- the fact that nothing that needs to be done can be done is completely slowing down her recovery. We hope that the lockdown will allow the hospitals to have more space (and to reduce the risk of spreading)!

Also, we apologize for not giving you an update on Sally in our last post. We thought it would be tiresome to read about someone who is sick, and that isn’t getting any better, and we didn’t want to bother you with that. The comments and DMs we got from all of you have proved us wrong, so we will try to keep you updated each time from now on!

And now for the VSN updates!

Wanini has successfully completed her Inktober challenge and has created 31 unique illustrations (one per day) on the theme of Valentyne Stories Necromancy! We hope that those of you who have been following Wanini on her little adventure have enjoyed it, and for those who might have missed it, here’s a sample of the illustrations!

Find them in higher resolution on her social media accounts!

During the campaign, we had promised a minimum of 40 backgrounds for the game. Please be aware that this amount is within our reach, and that there will be even more after! Well, we guess we were right when we said it’d be “a minimum of…”

Some of them will be route-specific: there will be places that you can visit with Kary but where you’ll never step foot in with Hyde. We will reveal some of these places before the game’s release, and it’ll be up to you to guess which of the boys will take you there!

At this moment, we have about thirty characters that have sprites. Most of them are secondary characters and some of them have up to two different poses depending on their importance within the story.

Similar to the backgrounds, some of the secondary characters are route-specific. However, it’s likely that you’ll encounter them while being with the other boys, and you will need to pay attention to their actions: their behavior could be a hint on how to proceed with the other routes!

The custom student unlocked during the campaign has been finalized! That character is Nijiko Shino’s (JM), who you’ll be able to meet from time-to-time at the Academy! 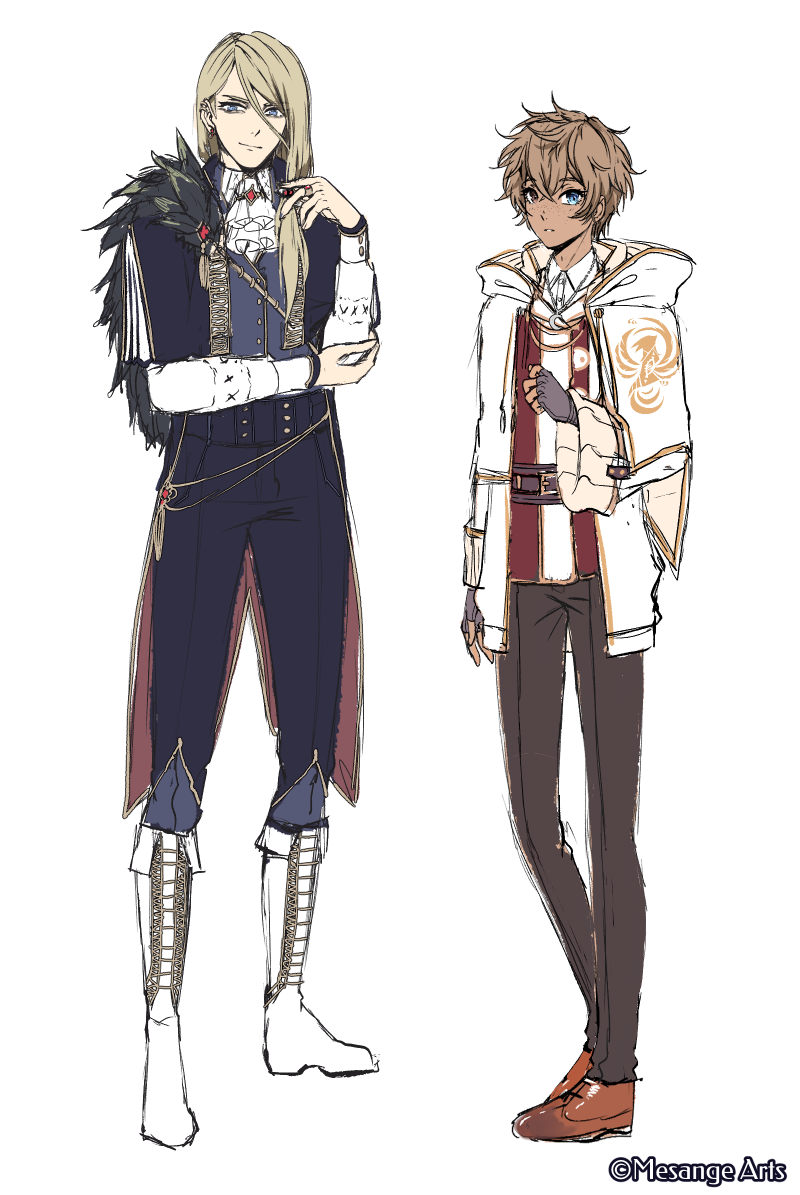 Regarding custom characters, we are done with the backstory of the first one, as well as his design!

Contrary to the custom student, he won’t appear on every route and will get the spotlight in Fenrir’s route. We can’t wait to reveal more about him, and our heartfelt thanks goes to Angor for allowing us to add such a colorful character to our game!

Our Tipeee has turned 1 already! Which means that some of you have been supporting us for twelve months! From the bottom of our hearts, thank you!!

After one year of existence, our loyalty program is switching to another format!

Now the loyalty program will spread over 12 months (no longer 10), with packs that will be sent to your home every 3 months. That will allow us to put in place an “anniversary” pack, which will be more substantial than the normal ones, and put an end to the beta+goodie KS bonus (which couldn’t remain forever!). You might think it doesn’t seem much of a change, but a few things should be taken into account. Here are a few of the specifics:

As fond of useful goods as we are, the anniversary pack will include a special good that’s more substantial than the other ones, and that will be available only via this platform.

The main reason for all these changes is that after one year of existence, bonuses have to be frozen. One year has passed since the Tipeee’s creation, we can’t call the newcomers “Tippers from the very start.” With these changes, long-time supporters can still access the bonuses (KS goods not included, unfortunately) and newcomers will get their small gifts (and a BIG one at the end of the year) like everyone else. The other reason is due to organizational concerns: 3 months between every pack is much more manageable, knowing that we have to prepare a brand new visual each time and handle the delayed shipments–-since everyone doesn’t unlock their 3 months at the same time.

There’s still going to be surprise presents in your envelopes, a little note on the back of your card, the quality of our mailings will remain the same, as well as our readiness and our eternal gratitude, and there will still be exclusives to unlock! The only difference being the pace of the packs and the removal of the first-time bonuses!

Please do not hesitate to contact us  if you have any questions. This is an important aspect of our Tipeee, and if something is unclear or you’re concerned about something, please tell us right away! Anyway, thank you for sticking with us for so long, we hope you enjoyed the bonuses we had in store for you, and we can’t wait to show you the next ones!

Thank you so much for your support!

Pre-orders on our shop end on November 5th! After this date, some goods won’t be available and the Kickstarter redeem code will have expired!

Thank you everyone and see you soon!

Hope Sally is able to recover !! Covid is AWFUL and I'm so glad to hear that she's been able to start eating again, that's a good sign !

I pray for Sally's recovery and I hope things get better real soon!

Thank you very much, we are praying for her recovery too!